Rina Sawayama is everything you could pray for in a pop provocateur, circa 2022: rude, audacious, unpredictable, hilarious, blunt, with a mean streak and an omnivorous ear. The Japanese British art rebel made waves with her debut, Sawayama, a pop manifesto with her own queer glam-rock sensibility. In gems like “STFU,” she managed to combine two totally different strains of Y2K-era radio — Britney-Backstreet teen disco and Korn-esque nu metal — into a new style of head-banging swagger. Anyone could hear it: Sawayama was born to break stuff.

Her long-awaited Hold the Girl is a personal journal — a Saturn-return statement about moving out of her twenties and facing up to her past. It’s smoother on the surface than Sawayama, channeling her twisted visions into straight-ahead pop tunes with arena-ready confidence. The whole album is high on queer bravado, but Sawayama explores vulnerable territory. As she belts in the Gaga-style title tune, “Sometimes I get down with guilt/For the promises I’ve broken to my younger self.”

But that younger Sawayama should be proud, because Hold the Girl remains prickly no matter how slick the hooks might get. She delves deep into her troubled childhood, raised by a Japanese single mother in London who didn’t speak English and struggled just to feed them both. Her main songwriting inspiration here is Taylor Swift — like a lot of artists, she got her mind blown by Folklore and took it as an invitation to get more into storytelling. As she told Rolling Stone U.K. last year, “I remember when Taylor Swift released Folklore, I was like, ‘This bitch is writing about fake stories and she just wrote a whole album. If she can do it, I need to do it.’” 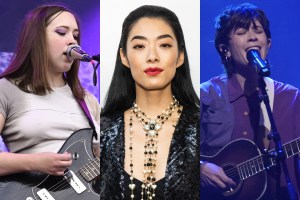 “This Hell” sets the tone, lashing out at homophobes with a brash mix of disco and yeehaw country — the intro has synthesized horse neighs and a quote from Shania Twain, declaring “Let’s go, girls!” “Catch Me in the Air” comes to terms with her mother, in a witty trip through Nineties radio, mixing guitar from the Smashing Pumpkins and vocals inspired by Gwen Stefani and the Corrs, with clubby beats from Madonna producer Stuart Price.

She’s at her weirdest and best when she ramps up the tempo for kinkier sonic twists and turns. “Your Age” is a mix of bhangra and electro-warp sound effects, as she tries to process some early trauma. She keeps asking, “Now that I’m your age/I just can’t imgaine/Why did you do it, what the hell were you thinking?” Then all of a sudden, the music cuts dead and she spits “You fucked up my life.”

“Frankenstein” is her peak, a high-energy meditation on the strange love between the mad scientist and the monster. She begs for a Dr. Frankenstein to take control of her and rebuild her — “please put me together” — until she breaks down in the chant, “I don’t want to be a monster anymore.” She lusts to be the perfect laboratory creation (“I’m trying to be normal/This trauma is immortal”), yet she also wants to escape and find her authentic self. There’s a digital “hey, hey, hey” chant halfway between AC/DC and the Village People, plus a crazed drum break from one of her teen heroes, Bloc Party’s Matt Tong; her producer is Paul Epworth, who’s done Bloc Party as well as stars like Adele and Florence + the Machine. “Frankenstein” sums up Sawayama at her musical and emotional extremes — like so many people these days, she feels torn between the desire to be beautiful and the need to be free.

She started writing these songs via Zoom with her trustiest collaborators, producer Clarence Clarity and co-writer Lauren Aquilina. But it seems the isolation of lockdown made her bolder about looking inside herself. The most exciting thing about Hold the Girl is that you can’t even guess where Sawayama might go next. She’s a cultural-pastiche artist on so many different levels — she’s even co-starring with Keanu Reeves in John Wick 4. But these songs make it clear that Sawayama can blast off into any future she wants.

Editor’s Note: You may have noticed that we got rid of the stars on our reviews. If you’re an engaged music fan in 2022, your opinion isn’t going to be defined by some random number. We’ll tell you right away (with some new labels) when a new album is a must-hear or, in rarer cases, an instant classic. After that, our critics will help you make up your own damn mind.