“History is one way of telling stories, just like myth, fiction or oral storytelling.” The words of speculative fiction author Ursula K Le Guin caution readers as they embark on Nikhil Gulati and Jonathan Mark Kenoyer’s journey through the Indus Valley. Penguin Random House’s newly-released graphic novel The People of the Indus is a 192-page illustrated glimpse into the ancient civilisation, interspersing academic expositions with a heartwarming fictional narrative.

The book is educational in intent, but not in the way that mainstream Indian audiences are used to. Facts aren’t stated, they’re suggested. Theories are offered, considered, and even contradicted. Academic discoveries aren’t presented as the finish line; they’re the starting point of an investigation into the recesses of human history. For readers who expect the didacticity of a conventional school textbook, the inscription from Le Guin is a redirection: “History is not a science, it is an art.” 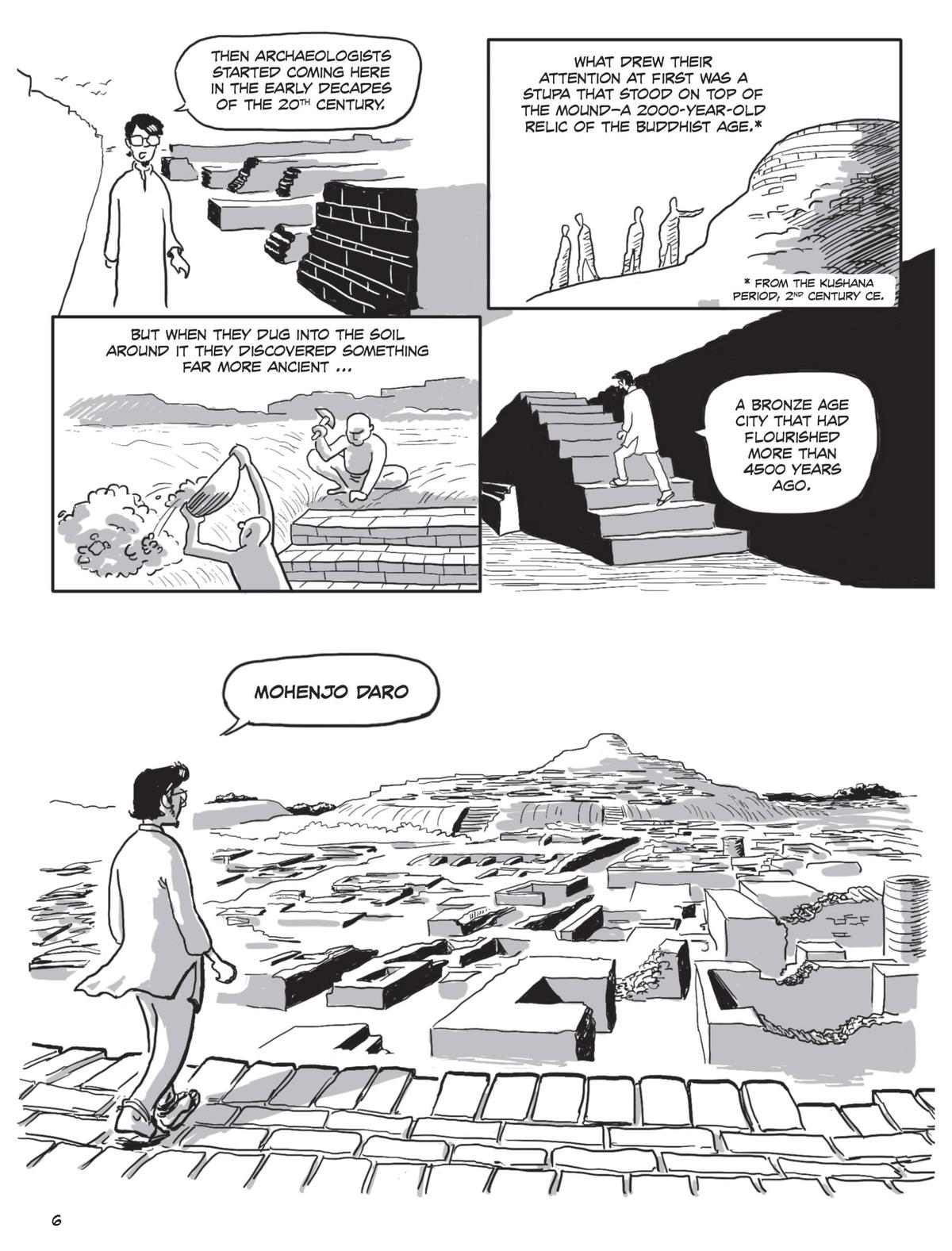 Pages from Nikhil Gulati graphic novel, The People of the Indus

Why are there no pyramids?

Gulati’s own journey began in Lothal, Gujarat, a site of the Indus Valley civilisation that the author and illustrator visited in 2013 when he was an MBA student at IIM-Ahmedabad. “I thought to myself, the Indus Valley was one of the three great ancient civilisations, so it must be super impressive,” he recalls, “But at first glance, I remember being very, very disappointed.”

The site is an expanse of grass and dirt, interlaced with the remnants of brick structures that betray no overt sense of significance. As Gulati and his friends wandered through the underwhelming landscape, a caretaker called out to them to “stay on the path”. “I kept thinking, ‘I don’t see any path!’,” laughs Gulati, “Just bricks and dirt.” Then, the caretaker pointed out the dockyard and the sight of the 13-foot-deep, brick-lined pool struck a nerve. “He told me that this was only a tenth of the site, the rest was still buried underground. It was clear that there was a lot more happening here than you could tell at first glance.”

Gulati was particularly struck by the notion that a great ancient civilisation — one that was concurrent with Mesopotamia and Egypt of the pharaohs — hadn’t left behind any impressive monuments. “Why isn’t it visually stunning, like it is supposed to be?” he remembers wondering, “That was the question that got me delving deeper into the subject, and the more I dug into it, the more fascinating things I discovered.” Like the fact that the lack of monuments was emblematic of a decentralised political structure, one in which there were no kings.

A graphic take on history

Developments in research and academia tend to inadvertently remain industry secrets for a long time, mostly because the lay audience doesn’t have the access to, or the ability to read dense, jargon-heavy reports. “Excavation reports are 800 pages long, and very dry” he laughs. The People of the Indus A page from Nikhil Gulati graphic novel, The People of the Indus

But Gulati soon realised that the magic of the historical method lay not in the individual items that were discovered, but in how these discoveries could be linked together across times and geographies. “Once you start connecting the dots, looking at what was happening in [archaeological sites] Lothal and Dholavira and Chanhudaro, some really cool things start coming out, which I guess nobody has really sat down and written about in a popular medium.”

On completing his MBA, Gulati moved to Hyderabad, where he was inspired to create Shepherd’s Hill: The Rise and Fall of Golconda (2015), detailing the history of the Golconda Fort. Around the same time, he was contacted by a doctoral student of archaeology who was excavating Rakhigarhi, an Indus Valley site in Haryana, about potentially creating some educational comics on the subject. “I told him, I was thinking of doing the exact same thing,” he says. “He was really helpful in hunting down excavation reports and journal articles that were hard to find.”

The book has been five years in the making, and Gulati says the graphic novel format allowed him to express historical details in a way that written language can’t. “I have always felt that history should be visual. Mohenjodaro is one of the only ancient cities where, if you walk through the ruins, you almost feel like you are in that place. I wouldn’t just want to read about it — I would want to see what it was like. Show me what it could have looked like if I was standing on a rooftop, 5,000 years ago.” As an illustrator, he was careful to steer clear of over-stylisation or personal flourishes, so as to present ancient sites and artefacts as authentically as possible.

Towards the end of the project, Gulati reached out to Professor Jonathan Mark Kenoyer, one of the foremost authorities on the Indus Valley and archaeology professor at the University of Wisconsin-Madison. Kenoyer became the academic who steered Gulati’s artistry, helping him craft a narrative that stayed true to facts. Next, Gulati is turning his gaze to a slightly different terrain. While he doesn’t anticipate doing long-form non-fiction work in the near future, history remains a huge inspiration for him as a creator. “I love the comics scene right now,” he says, “It is going to sound exaggerated, but it almost feels like a renaissance.”

Indeed, the medium has drawn a new generation of bold creators, who are defying narrative conventions to explore entirely new artistic styles and stories. Events like the artist-run Indie Comix Fest, and publications like comics quarterly Comixense, offer emerging creators a place to showcase experimental and socially relevant work in a manner that mainstream media does not. For this, Gulati is hopeful. “In 50 years, we will look back on this time, and see that this is where it all started.”

The freelance writer and playwright is based in Mumbai.