Aviva Dove-Viebahn is an expert on “Charlie’s Angels.”

Not because she’s a huge fan of the cheesy TV series and movies that followed, mind you.

Instead, “Charlie’s Angels” is one of the media franchises Dove-Viebahn has studied for her book project, “There She Goes Again: Gender, Power and Knowledge in Contemporary Film and Television.”

Dove-Viebahn, an assistant professor in Arizona State University’s Department of English, recently was one of 11 faculty members named as new fellows for the 2022–23 school year by the Institute for Humanities Research.

The 11 faculty members were awarded a total of $104,500 funding by the IHR Fellows program, which advances the scholarly writing and research of humanities faculty.

ASU News spoke to Dove-Viebahn about her book, which she hopes to have published in 2024 by Rutgers University Press, and how the portrayal of women in franchises like “Charlie’s Angels” colors the perception of women in contemporary society.

Note: Responses have been edited for clarity and brevity.

Question: So, what is the book about? 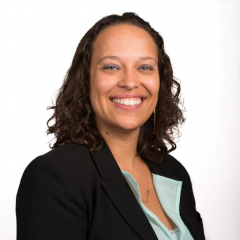 Answer: One of the reasons I use the beginning part of the title, “There She Goes Again,” is one of the things I’m really interested in is the ways in which we have these kinds of repeated motifs emerging over and over again in certain forms of, basically, a feminist media that is purporting to show women in kind of powerful roles.

One of the things I’m really interested in is looking at some of these franchises where we have characters who we see recur over and over again, like “Charlie’s Angels.” There’ve been multiple versions of “Charlie’s Angels” made over the last 50 years. Also, “Wonder Woman,” which we’ve seen since the late 1940s happen over and over again in different iterations. Even more recent franchises like the “Terminator.” I also talk about the “Resident Evil” franchise, which started off as a video game. And the “Supergirl” lineage that’s been in the comics.

We see how they’re sort of changing in contemporary film and TV, particularly with the way the film and television industry is trying to acknowledge the way women’s rights have changed over the last, say, 50 or 60 years, and sort of acknowledge new conceptions of feminism or other forms of progressive social justice politics. But the fact is, we often see the same kinds of concepts reiterated in 2019 or 2020 that we saw in the 1960s, 1970s or 1980s, just often much subtler.

Q: What are those concepts?

A: Many of these recurring characters are portrayed in powerful or stronger ways. Yet, if you dig down into the narratives or the ways they’re represented visually, a lot of those forms of power and strength are coming from things that we think of as traditionally feminine, like empathy, love, altruism or compassion. These are often the roots of their power.

Q: Why do you believe these narratives still exist?

A: I think one of the things that’s happening is that it’s so ingrained in our culture that these are the sources of women’s power. That’s one of the things that I’m trying to dig into a little bit, how these ideas then affect the way we think about women in real life, in political or economic life, in business or science. This is anecdotal, but I’ve heard and read people make comments like, “You know, we need women in politics because they tend to be more peace-loving.” Or they tend to be more altruistic.

Obviously, those things are good. I’m not suggesting in any way those aren’t things we want from our political leaders. But what happens is often these traits get assigned to women. So, if a female politician does not conform to the ways we might expect them to conform in terms of diplomacy or in terms of altruism or this sort of empathy, they often get punished far more than a male politician who exhibits the same traits because it’s not necessarily expected of male politicians.

I think it’s actually a feedback loop. Some media portrays characters in this way, and then we displace those same kinds of ideas on real people. But we’re also using these concepts in the real world and then they get fed back into media.

Q: In your study of “Charlie’s Angels” and other franchises, do you see any progress in the way women are portrayed?

A: I’m really interested in how the 2019 film tried to reframe — and also not reframe — some of the same kinds of things that we see happening. The film is directed by Elizabeth Banks, who’s also in the film, and you can tell that she’s trying really, really hard to make this a feminist film. They’re trying really hard in ways that I think are admirable to shift the characters.

“Charlie’s Angels” is known as a franchise that’s really about these sort of glamorous, model actresses playing detectives. They’re crime fighters, but they also have to be pretty and sexy at the same time. The 2019 film tries to shift away from that in that the women are not overly objectified. But the film still falls back on these ideas that the Angels really love high fashion. They’re also really interested in cooperative forms of leadership. Again, that’s not a bad thing. It’s the way in which this just gets packed on, that it’s what women want. It’s just so performatively feminist that it almost feels jarring because they’re trying so hard.

Q: Given the way women have been portrayed for so long in media, isn’t this in some way progress?

A: So, in every “Charlie’s Angels” iteration they always try to differentiate the three characters. But they differentiate them in ways that really don’t matter at all. They all still ultimately believe the same things. I think we need to see characters where they really are different people and represent different ways of being women in the world. I think you can have female characters without always having to be like, “Oh, yes, here are the ways in which they’re women.” We understand that it’s important to who they are, but it doesn’t have to be the main defining feature of where they get their power and knowledge.

Q: How do these “feminine” forms of power define female executives or politicians?

A: Personally, I think that empathy, altruism and cooperative power structures all could be very effective in terms of enacting long-lasting social change. But I think often because those traits are thought of as feminine, they’re devalued. And it’s easier with traits that are devalued as feminine to be dismissed. That is one of the things that I’m looking at in the media and writing about, the ways in which these traits that a character has that result in their power often end up being the same things that make them really vulnerable.

We can see that happening in the media, and I think in more subtle ways it’s being reflected in political life. Empathy, for example, I think should be a valued trait in leaders. And yet, sometimes those points of empathy are precisely where their political stances are devalued.

Q: Do you see this portrayal of women evolving over the next, say, 20 years?

A: That’s a good question. I do think it’s getting better. But I think that in some ways, part of the danger is that many people think that the work has been done. And that progress is linear from Point A to Point B of whatever. That’s just not true. I think sometimes we assume culturally that things are better because we’ve fixed things that were done in the past and we can move on to other things. But that is not the case.

We have to keep coming back to some of these issues, particularly ones that keep rearing their head over and over again. The work of accomplishing gender parity isn’t done, even if there have been great changes. There are still these endemic problems that we haven’t managed to fix yet. Not always feeling like you have to sort of ground everything in these kinds of feminine forms of power would be a starting place.